The U.S. Army’s Best Recruiting Tactics—and How You Can Deploy Them 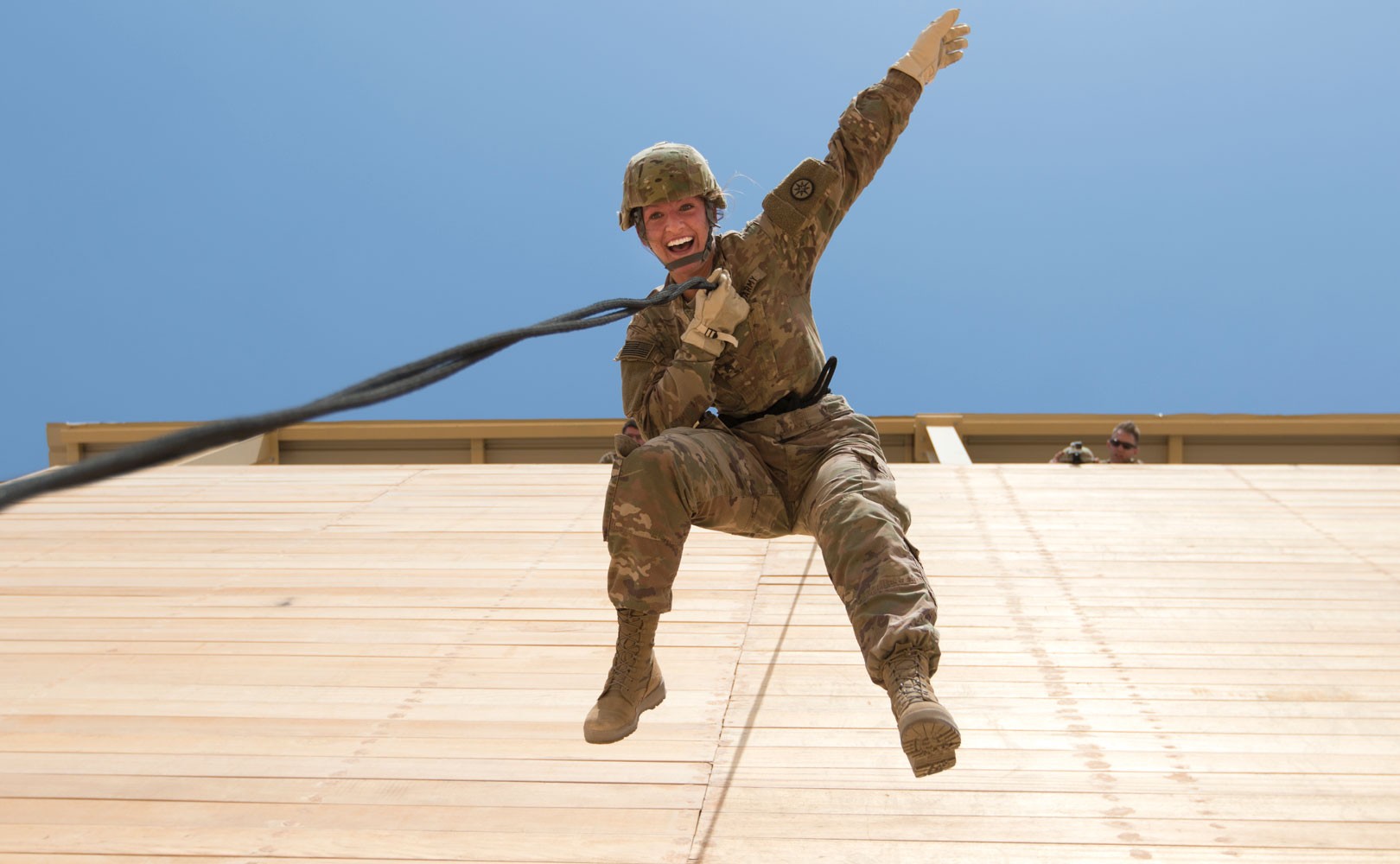 The U.S. Army has many difficult jobs, and recruiting for positions like —medic, tank driver, helicopter pilot, and explosive ordnance removal (bomb squad), to name a few, is no easy feat. But there is general agreement that since the United States went to an all-volunteer army in 1973 one of the toughest assignments is a recruiter.

Why? Because an Army recruiter is expected to find young Americans, generally between 17 and 24 years old, and persuade them to serve four to six years of active duty with long hours and low pay (median pay for enlisted folks is $26,000 a year). On top of that, it’s a dangerous job – the Army currently has boots on the ground in Afghanistan, Iraq, and Syria.

Given all those challenges, Army recruiters need to work hard and be extremely strategic.

As unemployment drops to its lowest levels in decades, the Army has an ambitious 2018 goal of 80,000 new active-duty recruits. But the Army’s recruiters come ready to fight. Here are five of their tactics that any recruiter can deploy.

1. Become part of the community in which you’re recruiting

In many parts of the country, the Army is nearly invisible. Soldiers live, train, and work at forts and military installations that are largely insulated from the rest of the community—with Military Police at the gates to make sure of that.

But to recruit, the Army has to go “outside the wire.” And to thrive, recruiters told the Army Times, they need to “become part of the community rather than just fish in it.”

What does that mean? For successful army recruiters, engaging with the local community may mean attending a slew of high school events and frequenting street fairs, block parties, and community centers to meet both potential recruits and their families.

Sergeant First Class Duggan Myron said that recruiters sometimes bring coffee and doughnuts—and business cards—and leave them at local high schools, while Sergeant First Class Dana Rothstein said she attended a full schedule of high school football and basketball games. “They have to see you as human,” Rothstein said, “not just some robotic person out there for a number.”

The same goes for civilian recruiters. Make sure prospects see you as someone who cares about them rather than someone simply out to meet quotas. One way to do that is to imitate the Army recruiters and become part of the “community” in which you’re recruiting.

Community, for this purpose, could mean a city or region, but it also could be a set of colleges, professional organizations, or online groups and forums—whatever might bind together the kind of people you’re looking to find.

If you’re trying to hire more women, say, you might try going to women’s colleges and professional organizations. If you’re hiring engineers, you probably know the colleges with strong engineering programs. And you may know in which parts of the country engineers are flocking. If not, maybe LinkedIn Talent Insights can help you suss out where the engineers are and where there might even be a surplus.

2. Know the benefits of your organization, then sell them confidently

While recruiting for the Army is like running an endless obstacle course, the service also has some strong selling points—it’s a ticket to adventure for some, and a ticket out of town for others; it’s a steady paycheck from a well-funded business that’s been around for nearly 250 years; and it’s a chance to earn vocational and professional skills that would often be difficult, if not impossible, to pick up otherwise.

The Army offers paths to 150 career opportunities, from firefighter to military police officer, from mortuary affairs specialist to human resources officer (don’t you wish someone was saluting you every day?). And when Army recruiters talk to prospects, they are most often keen to know what their career development will look like.

No surprise there. According to research from our Inside the Mind of Today’s Candidate report, 42% of Millennials said they took their most recent position because the company offered more opportunities to advance their career—continuous learning and new-skills development are a huge lever.

To attract the right people for the right roles, become the best salesperson for your company’s distinctive benefits and development opportunities.

3. Sell your purpose, too

My best friend graduated from the U.S. Military Academy at West Point and spent a decade in the Army as a Soviet specialist in military intelligence. Every time I saw him he reminded me—and he was only half kidding—that his job was nothing less than keeping the world safe for democracy.

As a mission, that’s clear and compelling. And the call to service is still quite alluring to many young people as they graduate from high school. Which isn’t really surprising as the purpose is one of the chief things young job seekers are looking for.

Purpose is a competitive advantage as well. According to our research, purpose-driven companies have employees who are more likely to be satisfied at work, form strong relationships with co-workers, perform better, and speak highly of their company.

If your company, like the Army, has a strong mission-driven culture, that fact should inform all of your employer brandings. Leigha May, the Head of People at Omaze, says: “Especially in recruitment, you need to believe wholeheartedly in the mission of your company and sell that every day.”

4. Set realistic expectations from the get-go

The Army weathered a string of recruiting scandals in the early 2000s—misleading some prospects about what their commitment would entail and helping others skirt the physical, educational, and legal standards that recruits have to meet.

In an effort to halt all that, the Army stopped giving individual recruiters quotas to hit and, instead, now sets team goals for each recruiting station. “We don’t really use tricks,” Sergeant First Class Joshua Morrison said. “The best message to get through to somebody is a harsh reality.”

Not really. The Army doesn’t want to deal with battalions of disenchanted soldiers and early washouts. And it can avoid much of that by setting careful, realistic expectations.

Every recruiter needs to manage expectations. Honesty and integrity will be your long-term calling card and will help your company minimize churn. New hires will flee if they believe that the expectations about their new job or new company were misrepresented—1 in 4 will quit in their first 45 days.

That’s why LinkedIn’s Head of Recruiting, Brendan Browne, encourages recruiters to “unsell” the job and be upfront about the downsides of the role and company. This sets expectations, builds trusts, and helps candidates self select out early on.

5. Understand just how critical recruiting is — and continue to invest in it

The Army, of course, doesn’t go into the talent skirmish unarmed. Its massive recruiting effort includes some 12,500 soldiers and civilians working at 1,400 recruiting centers.

Today’s Army spends billions on recruiting and training each year and, according to one source, pumps nearly $300 million into ads on TV, radio, digital media, direct mail, and sports-related campaigns. This means the Army spends roughly $3,500 a recruit just in advertising.

Yes, that’s a lot of ads. And some of them are brilliant. The Army’s recent “More Than a Uniform” TV ad, for example, touches evocatively on the opportunity for travel, adventure, education, personal growth, and purpose (it’s “the jersey of the greatest team on earth”), all in just over two minutes.

Fortunately, creating ads that cut through all the clutter and capture eyeballs—as well as hearts and minds—doesn’t require a war chest filled with hundreds of millions of dollars. It requires bold creativity and the focus to find the message that will resonate with your target audience. Here are some must-dos for creating ads that will get people’s attention.

Don’t just invest in recruiting, put your best people on it

A hundred years ago, the Army could pull in recruits just by putting a sign on the street with Uncle Sam pointing a finger and saying, “I want YOU for U.S. Army.”

Today, the Army asks its recruiter to roll up their camo sleeves and get involved in the towns and cities in which they work and aggressively sell the branch’s benefits and mission. To help them, the service also invests heavily in employer branding, with enormous ad buys and compelling messaging.

And in recent years, the Army has turned to a new source of talent to lead its recruiting battalions: U.S. Army Special Forces, more commonly known as the Green Berets. The Army has, in essence, turned recruiting over to some of its most fearless performers.

But then, isn’t that what your company’s already doing?

*Photo from the U.S. Army

4 Tactics Your Hiring Teams Can Learn from Army Recruiters

4 Tactics Your Hiring Teams Can Learn from Army Recruiters